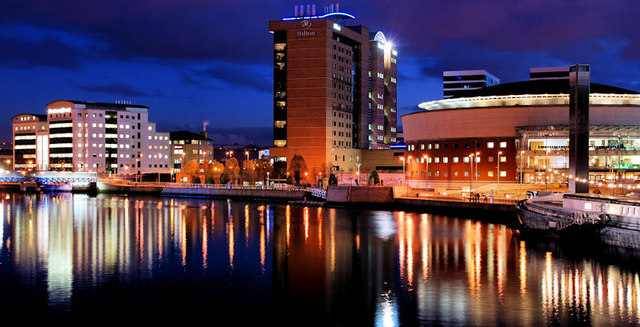 Belfast is ranked as the second biggest Irish city the first one being Dublin. The city is located at the River Lagan's mouth and is the capital of Northern Ireland. Situated between two low lying hills, Belfast is a metropolitan city and houses around half a million people.

It was once a big ship-manufacturing centre where the infamous Titanic was built. Though the city has been associated with insecurity in the past, successive governments have managed to make it secure. As a consequence, Belfast has significantly transformed to become a major tourist destination. The following are the best attraction sites in Belfast. Alternatively here are some more things to do in Belfast.

Located about four miles from the city’s central business district, the castle is popular for holding numerous events throughout the year with the most famous ones being weddings. The structure was put up in the 1870s but has since undergone numerous embellishments. The site has a park known as Cave Hill and a restaurant as well as an adventure playground all of which provide an exciting picnic experience, especially over summer seasons.

St. Anne’s Cathedral was designed by Sir Thomas Drew with its construction beginning in 1898. It is the main centre of the Irish Anglican church. Constructed using neo-Romanesque basilica design, the church is fitted with three entrances adorned with sculpture at its western wing. Other attractions of the church include marble tiles, carved works of stone, unique mosaic ceiling, and delicate woodwork.

Laying on a 55 acre land, Belfast zoo has over 140 animal species. established in 1934, the zoo has undergone extensive upgrades since then and currently attracts for than 300,000 visitors yearly. Some of the remarkable animal species in this zoo include Barbary lions, Malaysian sun bears, Asian elephants, and Sumatran tigers among others.

Established back in 1828, Botanic gardens spread over a 28-acre land. It was transformed into a public pack in 1895. The garden houses magnificent palm trees along with diverse tropical plants. The garden also has curved glass and iron forming one of the ancient examples of glass structures that illustrate how technological advancements impacted on the field of horticulture during the Victorian era. The garden houses the Tropical Ravine which protects some the oldest exotic plant varieties including cinnamon, orchids, banana, and bromeliad.

Waterfront Hall is a magnificent conference and entertainment centre reflecting how the city of Belfast has regenerated over the years. Opened in 1997, Waterfront Hall has received more than five million tourists with currently being the best attraction for top world performers and musicians where a range of exhibitions are hosted. The hall gives an impressive sight at night when lit up. The majority of tourists visit this place not only to enjoy the numerous concerts done here but also to enjoy meals from the site which provides a breathtaking view of the river bank and the topography beyond.

The building is located along the Great Victoria Street, Constructed back in 1895, the structure survived the 1970s conflict-filled years of Northern Ireland when it almost got demolished. The building has undergone extensive renovation such as replacement of the main auditorium’s ceilings. It currently hosts live performances and operas and is considered as one of the major landmarks of the city.

Ulster museum lies a short distance from Waterfront Hall. The museum is one the must-see sites in Belfast having undergone a major renovation in the recent times. Ulster museum houses Egyptian Mummy of more than 2500 years old. Moreover, the museum is designed with modern masterpieces, art collections, natural science, and ancient relics that spread across the several of its floors.

It is the largest visitor attraction where visitors stream to see the distinctive building spot where the ill-fated Titanic was built. The visitors get an opportunity to interact with nine exhibitions that illustrates a city that once was the biggest ship manufacturing industry in the 19th century. At this site, visitors are offered guided tour services to enjoy the mammoth dry dock. The building resembles a star shape representing the logo used by the company that once occupied it known as the White Star line. It houses several artifacts including menus, brochures, and letters.

Crumlin Road Gaol was a famous jail in the past and closed down in 1996. However, it reopened in 2012 becoming a major attraction site in Belfast where visitors can recollect the history of Northern Ireland. A tour through the site illustrates the incarceration of children and women along with the discrimination of loyalist and republican inmates. There are underground tunnels connecting the jail to court building where cruel sentences were passed. Learn about more Belfast attractions can be seen here.